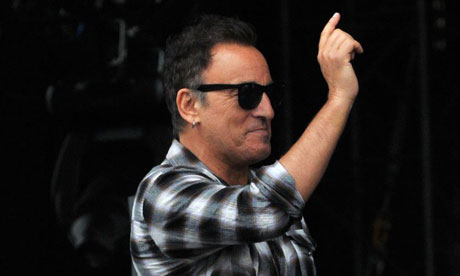 Thank you. Pete's receiving the Stevie Ray Vaughan Award this year for his dedication to helping others who struggle with drug and alcohol addiction, for his work with the Who and his Double 'O' charity, Pete's got a long history of working hard and raising spirits and money for worthy causes. Here's just a few: In 1986, Double 'O' promotions put on a Colombian Volcano relief concert. In 1989, the Who reconvened for an anniversary tour, generated over $8 million for children's charities throughout the U.K. and the U.S.A. In the past years, the Who have helped the Teenage Cancer Trust raise close to 3 million pounds to provide cancer wards and screening units.

There are plans on this tour to raise funds for charities as various as the Teenage Cancer Trust, the Michael J. Fox Foundation, the Andre Agassi Charitable Foundation for Underprivileged Children, the Robin Hood Foundation which funds and supports innovative poverty-fighting organizations in New York City. I could go on and tell you much more about what Pete and the Who have done for others, but I think I'll tell you a little bit about what Pete's done for me.

I wouldn't be windmilling a Fender Telecaster if it weren't for Pete Townshend. It's the summer of '66 or '67, I'm not sure which one, but it was the first American tour that the Who were on. And I'm in a long line snaking out of Convention Hall down the boardwalk and the billboard read, in big type, Herman's Hermits [laughter], then The Who [laughter].

I was a young, pimply-faced teenager who managed to scrap enough together to go see my first rock concert ever. Pete and the Who were young pimply-faced teenagers with a record contract, a tour and a rude, aggressive magic. They were on this tour, of all things, opening for Herman's Hermits [laughter]. There was no justice. So, I scrambled to my seat, which seemed like the cavernous Convention Hall and I waited for the rumble to start.

The first band out, I think was a band called the Blues Magoos. They were at a New York City, uh, yeah,… There are a few folks who remember the Blues Magoos out there? [cheers] I don't believe you [laughter]. But they had a great song, "We Ain't Got Nothing Yet," and they came out and they had these electric suits and when all the lights went out in the hall, the electric suits lit up and, it was high-level special effects for the time. But then the Who came out. I think they played for probably no more than 30 minutes, and before Pete and a cloud of smoke demolished his guitar, bashing it over and over into the floor.

And his amplifier… Now the audience was filled with a significant number of teenyboppers who were waiting for "Mrs. Brown, You've Got a Lovely Daughter." So they sat there with their mouths agape, and they were wondering, like, of course, who are you? Who are these guys? What are they doing? Why are they doing it? And all I knew was, for some reason, this music and the demolishing of these perfectly fine instruments filled me with incredible joy. There was something wonderful about the wanton destruction of good commercial property [laughter].

It was the joy and giddiness of the riot that the Who managed somehow to safely attain; semi-safely attain. But all I knew is that it made me happy and it thrilled and inspired me. Inspired me to a degree where I was in a young band called the Castiles. I was about 16 years old.

We had a gig the next weekend at Saint Rose of Lima Catholic School in the basement for the CYO dance [laughter]. So I went out and I bought a smoke bomb and I bought a strobe light and I brought them over to the gig. And as the night neared its end — not being able to smash my guitar — It was the only one I had, you know. At the end of the night, I lit the smoke bomb in the Catholic school basement. I turned on the strobe light and I climbed on top of my damn electro-amplifier holding a vase of flowers that I had stolen from one of the upstairs classrooms [laughter].

And with this huge flourish, melodramatically, I raised the vase of flowers as the flickering, blinding strobe lit me with the smoke all around me, and as the nuns looked on in horror, I reached up and smashed them onto the dance floor [laughter]. And then I jumped off the amp and I stomped all over the petunias, putting them into an early death. Of course, I looked ridiculous and like I lost my mind. The vase of flowers simply failed to have the grandeur of the newly minted Telecaster being smashed to splinters. But, we worked with what we had so… I went home smiling, feeling like a blood bond with Pete Townshend, and I never looked back.

As I grew older, the Who's music seemed to grow with me. The sexual frustration, the politics, identity. These things coursed through my veins with every concurring Who album. I always found myself there somewhere in their music. "The Seeker"; the seeker is the guy in "Born to Run." There'd be no "Down in jungle," ba da ba, "land," without Pete's slashing bloody attack on his instrument. Pete is the greatest rhythm guitarist of all time [cheers]. He plays such incredible rhythm and he showed you don't have to play any lead. It's an amazing thing to behold, really. Pete managed to take the dirty business of rock & roll and somehow make it spiritual and turn it into a quest.

He may hate this, but he identified the place where it was noble and he wasn't afraid to go there. I took a lot of that with me as the years passed by. So Pete, I'm here to say, congratulations, well deserved, and thanks for not just Who's Next, and for Who Are You, but for who I am [applause]. Congratulations Pete.